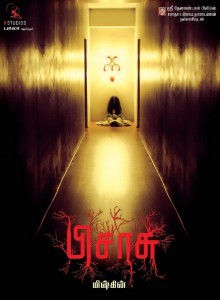 Pisaasu, an experimental horror-drama written and directed by Mysskin is B Studios’ third production venture. The film stars debutants Naga and Prayaga Martin in the lead. Pisaasu features music by Arrol Corelli and camerawork by Ravi Roy.Gopinath edited the film. Hong Kong based stuntman, Tony Leung Siu Hung was brought-in to collaborate with Mysskin on the climax stunt sequence. Pisaasu released on 19th December 2014 to highly positive reviews and was declared a hit at the box-office. Pisaasu has been remade in two different languages;Pisachi in Telugu and Rakshasi in Kannada.