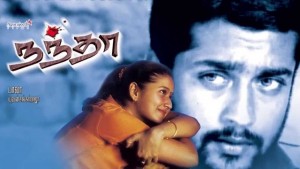 Nandha delves into the psychological realm of man and touches upon the mother-son relationship and the dire consequences of depriving a child the love and attention it deserves. The movie won wide critical acclaim both at home as well as in Sri Lanka for its sympathetic view towards Sri Lankan refugees. Surya, as the lead character, gave a riveting performance. In his inimitable style, Bala takes you on a journey through dark, twisty passages in our human mind, questions relationships and breaks the mould on every pre-conceived style in Tamil movies.