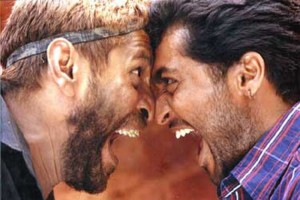 In this movie, Director Bala comes together with his previous two Leads – Vikram and Surya – to create yet another haunting tale. Vikram plays a dysfunctional, often violent, a Shakspeare’s “Caliban”esque role who grows up in a crematorium with minimal contact with humanity. The story etches the growth of his relationship with a small-town hustler – Surya and the way it transforms and humanizes him.

Pithamagan was also seen at International film festivals. The Royal Tropical Institute in Amsterdam screened the film along with a few of the best films in Tamil cinema of all time. (April 22, 2005).