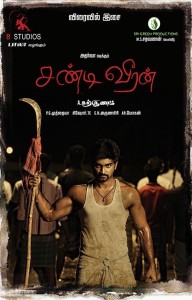 Chandi Veeran, an action-drama, directed by A. Sarkunam is B Studios’ forth film that has been released. P.G. Muthiah is the cinematographer of the film whilst S.N. Arunagiri composed the songs and musical duo, Sabesh-Murali scored the background music. Raja Mohammad is the editor of the film. The film starring Atharvaa Murali, Anandhi, Lal, Rajashree, Bose Venkat and Ashvin Raja released on 7th of August 2015 to mixed reviews with average collection at the box-office.