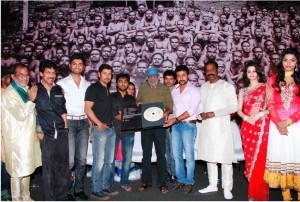 The audio and trailer of Paradesi was launched in a grand manner at Sathyam Cinemas, Chennai on November 25, 2012. Young music director, G.V. Prakash Kumar and lyricist, ‘Kaviperarasu’ Vairamuthu, has joined hands with Bala for the first time in Paradesi. The album consists of five tracks; composed and lyrics penned once the film has been shot. Prominent Indian actors, Vikram and Surya received the audio from Bala’s mentor and veteran director, Balu Mahendra, The trailer of Paradesi was also screened at the event.