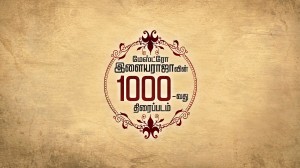 With a career span of four decades, ‘Isaignani’ Ilayaraaja, fondly referred to as Maestro has composed songs and scored background music for thousand films. Tharai Thappattai audio was launched in a simplistic manner on the 25th of December 2015, after the Chennai floods. The album consists of seven tracks; five songs and two theme scores. He has also written two songs in the film; Idarinum and Aattakaari Maaman Ponnu. Being the musical genius that he is, Ilayaraaja was lauded for delivering an album consisting of original folk tracks.

The album of Tharai Thappattai consists of tracks listed below: